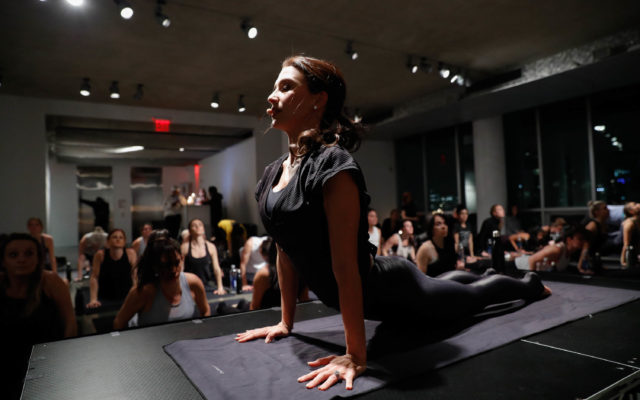 NEW YORK, NEW YORK - DECEMBER 03: Hilaria Baldwin leads a yoga class at the Carbon38 and Hilaria Baldwin Host "Om For A Cause" for Girls, Inc at the Glass Houses on December 03, 2018 in New York City. (Photo by JP Yim/Getty Images for Carbon38)

Now there is a  yoga class that has its own boozy, F-bomb-laden class that just might attract some like me. It’s called “Rage Yoga. According to its website, the class is all about “stretching, positional exercises, and bad humor, with the goal of attaining good health and to become zen as f*ck.”

So what exactly makes it unique from other forms of yoga? A few things. First of all, Rage Yoga is a safe space for swearing. At any given class, you might hear F-bombs bursting in air and plenty of more specific gripes being vented as participants let out the emotions they’ve bottled up while trying to twist themselves into a pretzel.

“[Rage Yoga] allows you to have a safe space to let go of your and frustration and rage in a healthy way,” Rage Yogi Ashley Duzich told CBS Dallas-Fort Worth. “We actually take beer breaks during class.”

Being that we live in Alaska and don’t have one here (yet) Rage Yoga’s site also features a wealth of digital instructional content available for purchase so you can drink, scream, and stretch along at home at your own pace.

Finally a yoga class I can get get behind and support. I just can’t attend it.