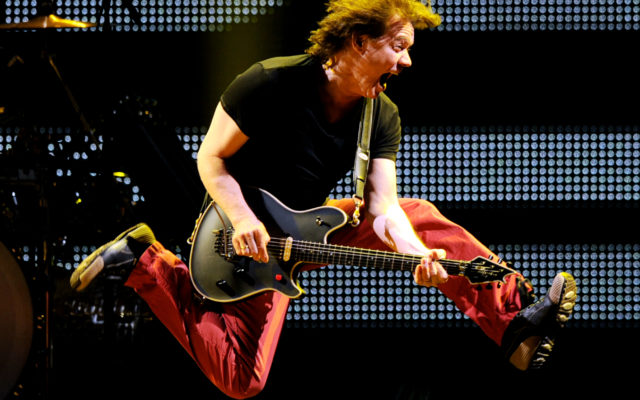 INGLEWOOD, CA - FEBRUARY 08: Musician Eddie Van Halen of Van Halen performs at their dress rehearsal for family and friends at the Forum on February 8, 2012 in Inglewood, California. (Photo by Kevin Winter/Getty Images)

There are a lot of very sad peoplke out there today. Rest In Piece Edward Lodewijk Van Halen.

What a Long Great Trip It’s Been.. pic.twitter.com/M5pmkVi7hW

Heartbroken and speechless. My love to the family. pic.twitter.com/MQMueMF2XO

No words…Heartbroken, my love to the family💔

40 years ago my life changed forever when I met you. You gave me the one true light in my life, our son, Wolfgang. Through all your challenging treatments for lung cancer, you kept your gorgeous spirit and that impish grin. I’m so grateful Wolfie and I were able to hold you in your last moments. I will see you in our next life my love.

Rest In Peace @eddievanhalen You will be missed! #Legend pic.twitter.com/A2dpG41dbS

Gene Simmons on Eddie Van Halen: ‘He Was a Superhero’ https://t.co/xicBIQn0hB

RIP Eddie Van Halen. Van Halen were a tremendous influence on both Vinnie & Dime & Pantera. Hopefully they are all rocking out together now! pic.twitter.com/XtnL33aGsd

It would be impossible to measure the impact he had on the world. He changed it for all of us. Farewell #EVH pic.twitter.com/P8noiAqTyL

Just when I thought 2020 couldn’t get any worse, I hear Eddie Van Halen has passed. So shocking- One of the nicest, down to Earth men I have ever met and toured with. A true gent and true genius. RIP. So sad.Thoughts go out to his brother Alex, and his family. pic.twitter.com/fwIw040YMX

Oh NO! Speechless. A trailblazer and someone who always gave everything to his music. A good soul. I remember first seeing him playing at the Starwood in 1976 and he WAS Eddie Van Halen. So shocked and sad. My condolences to Wolfie and the family. https://t.co/ExAWzFAEYJ

The world lost an icon, innovator, showman, virtuoso, master songwriter and perhaps one of the biggest inspirations ever to learn how to play guitar. Heartbroken to hear of Eddie Van Halen’s passing. Our love, condolences and best wishes to his his family, friends and fans. #RIP pic.twitter.com/pGhPUXRzyb