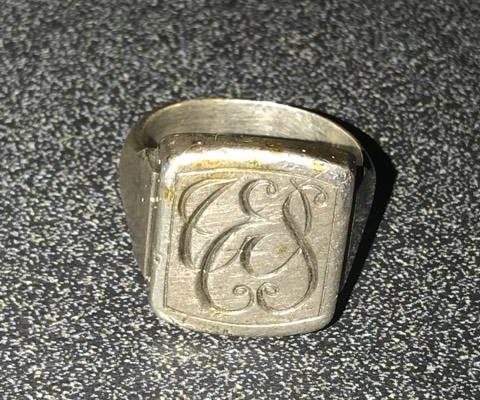 A story I’m still piecing together. It was made for my grandfather, William Elmer Stennett, by a German POW during world War II.

From what I understand, after my pap pap escaped from being a POW he was then assigned to a security duty watching German POW’s. How odd that must have been, to go from a prisoner of war to watching them. During that time a German POW must have befriended him because he made my grandfather 3 rings. 1 for him, 1 for my gram and 1 for his little girl, my aunt.

The ring was made from a coin (we don’t know what kind) and a spoon. That’s as much as we know. We don’t know the German soldiers name (or even if he survived the war) but it was said that he was a jeweler. We don’t know how long it took to make. Each ring has their initials engraved into it although we don’t know how he did that either.

I didn’t even know this ring existed until about a year ago.

My grandfather was just like most all other WW II vets. He never spoke of the war. He never told stories. He never said anything to me personally about the war. I remember trying once to talk to him about the war but I was very young and he didn’t want to talk about it. Knowing what I know now I understand why.

His basement had a few things from WW II in it. Things we were actually allowed to play with. American and German helmets from the war were just toys we used to play war with. One of which had a dent in it from stopping a bullet

It is probably why I love history so much. Its why I have always been drawn to WW II memorabilia. But I have never seen anything like this ring. It may be the most beautiful ring I have ever seen because of where it came from and how it came to be.

I’m so glad my dad brought it up for me to see. I wish I could find out more about it but that is pretty much impossible at this point.

Thank you pap pap for what you did for not only me as a child but for the entire country. I wish he was still alive so I could bring him to Alaska to fish. He would have loved that. And I would have loved to spend more time with him.