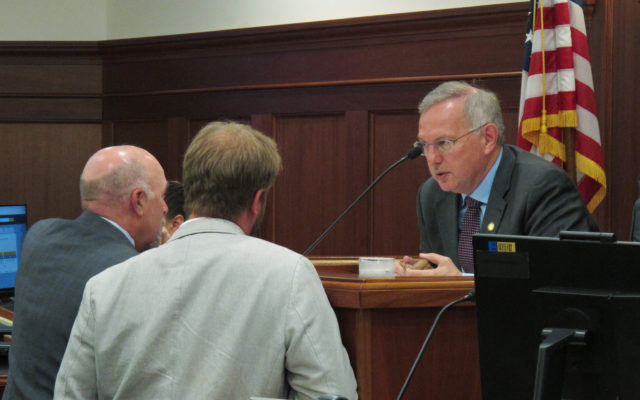 The Alaska Legislature has approved paying residents an oil-wealth fund check of about $1,600 this year.

Lawmakers in the same bill largely restored budget vetoes from Gov. Mike Dunleavy. The bill adds back much of the $130 million Dunleavy vetoed for the University of Alaska system.

The bill now goes to Dunleavy, who could again veto any of the spending. Dunleavy has supported an oil-wealth fund check in line with a longstanding calculation that has not been followed the last three years and would equate to checks of about $3,000 this year.

Dunleavy told reporters he would take a look at the dividend approved by lawmakers Monday but called the action unfortunate.

The Alaska Senate has approved paying residents a dividend of roughly $1,600 this year from the state’s oil-wealth fund and reversing many of Gov. Mike Dunleavy’s operating budget vetoes.

If the bill gets a final OK from the House, it will go to Dunleavy. He has supported a dividend payout in line with a calculation that critics say is unsustainable and would equate to checks of about $3,000 this year.

He can veto spending again, too.

Majority Republican Sens. Shelley Hughes and Mike Shower appeared briefly during debate before being shown as excused, without an immediate public explanation.

Caucus rules do not call for automatic removal of members who fail to support a majority budget but leave members open to consequences. Republican Sen. Lora Reinbold was the lone dissenter.

The Alaska House has passed a fully funded capital budget, a critical remaining piece in the special session.

Monday’s vote was the House’s third try this special session to pass a fully funded capital budget, which relies on funding from the constitutional budget reserve fund. That fund required 30 votes in the House to tap. The vote was 31-7.

Supporters of the bill had fallen one vote short of the threshold in the prior effort to pass a funded budget.

The bill also includes language intended to prevent various accounts, including those used for rural energy costs and student scholarships, from being swept into the reserve fund to help repay money that’s been taken from it.

How Metallica Created the Loudest Whiskey